Snoozing is delaying life. And I’m guilty. We’re all guilty. The challenge is to not press snooze. But to wake and live as much as you can before sun down. This day, we would wake and find ourselves uncomfortably comfortably next to tigers. It was John Gardner who once said, “God made the cat to give man the pleasure of stroking a tiger.” Well, I’ve never taken to cats much. I always figured if they were a bit bigger they would have no second thoughts about eating us. Call me a dog person. But a tiger, well, they are what they are. And to get to stroke the back of one of them would be more rewarding than one thousand cats. So that’s what we did.

By the time our small crew assembled it was approaching noon and we were pumped to go see the big cats. Our good friend Say pulled the truck up and we set off for Tiger Kingdom. Everyone piled into the back and Say asked me to join him up front. We have met many incredible people on this journey but none grew on us more than Say. He’s just one of those good hearted people that constantly goes out of his way to help others. All of his talk is about what in life is “good for the body” which he really means is good for the soul. He lives his credo.

After about an hour and a half excursion, it was tiger time. Now the elephants were one thing, but to get inside a cage with a 500 pound killing machine can put your nerves on slight edge. Once again, I found myself torn. Not often in life do you have a chance to be so close to this gorgeous creature, but they should be free. All beings should be free. This habitat claims to only use “stick method” training and well fed tigers, but to me they seemed at least a little sedated. Stick method simply means since they are born they get whooped on the behind with a stick every time they get out of line. Similar to catholic schools back in the day. Which isn’t too reassuring because I’m sure those students still acted out. I didn’t want to find out what would happen if a tiger acted out.

Our first test of courage would be getting in with the medium sized tigers. Okay, ready. Don’t touch their head. Don’t turn your back to them. Approach from behind. Keep your wits. Pray. Go. Our first meeting went smooth and a false sense of comfort set in. At that point, any comfort was welcome though. You mustn’t be afraid. I felt they might sense fear. Move slow. Be brave. By the end of the first encounter, the tiger had stretched out and even had his hind legs lying across my lap. I thought my goofy bulldog back home had huge paws. Christ. You should see these things up close. Next, we went in with the slightly smaller tigers. These guys seemed to be the most rambunctious. They had a small pool they repeatedly flopped into and a few coconuts that doubled as toy balls. As we would sit with one tiger, in a split second two tigers would go rolling by chasing their ball. A few times even smacking the ball in our direction, tempting us to join their game. Once even completely jumping over and clearing a seated woman’s head while she wasn’t following the “keep your wits” rule. Following that dance, it was on to my favorite part, the baby tigers. Once in their pen, all rules were forgotten. We wrestled with them, cuddled them, held them, and became part of their pack. It was an experience unlike anything in my life. At one point, a small one climbed up on my lap and took a solid play bite into my arm. As I felt the pressure from his jaws, I flung him off. I took off a sandal and drew his attention to that. Next thing I hear is some British woman who had the gaul to start yapping not to do that because they will think it’s okay to go after people’s feet for the sandals. Okay, I get it. I replied with, “The. TIGER. Is. BITING. MY. ARM. Lady.” A little more horsing around and it was on to the big tigers. And were they massive. We joked with one of the trainers, “What do you do if one of these guys attacks us?” He understood the question but just kind of laughed and shrugged it off, which was a bit concerning. As we climbed on to the deck with the tiger, he appeared a tad aggravated. He was pacing and it seemed like he wanted to get down, but the trainer wanted him to stay with us. After a few heavy growls, he took a rest and sprawled out on the deck. I’m not sure if I had gained courage or stupidity, but I got down right next to him and put my head on his side and even picked up his tail and pretended to bite it. An observation not over sighted was just how beautiful these animals really are. I’ve never been one for hunting. I mean I can see if it’s for survival and within reason, but to hunt such a beautiful animal such as an elephant or tiger for sport disgusts me. They say there used to be hundreds of thousands of tigers in the mountains of Asia and now that number has dwindled down to around just one thousand. We owe it to these animals to protect and nourish their existence here. I will treasure my time curled up next to them.

As we made our way back to the city, I began to feel a cold coming on. That damn guy from the bus got us sick. When we returned, a whole group had formed in the sitting area of the hostel and were preparing to go out to celebrate one of the Australian gent’s birthday. There was no time to be sick, so we went back to Zoe’s and drank and danced the night away in a big circle full of ridiculously bad but funny moves. Good times with good people. No need to set an alarm for tomorrow. 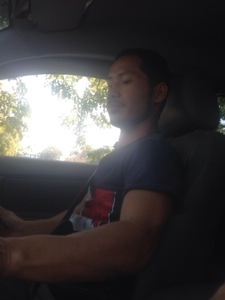 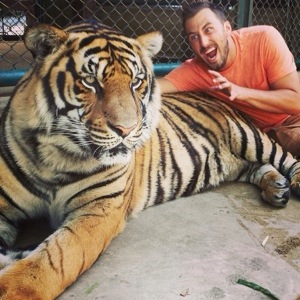 1 thought on “What happened when I stopped pressing snooze.”

native of the north

Not All Who Wander Are Lost

The Life of Me

A glimpse into the mind of this galavanting gypsy girl

One picture a day from New Jersey to Los Angeles.

One Love, This Life